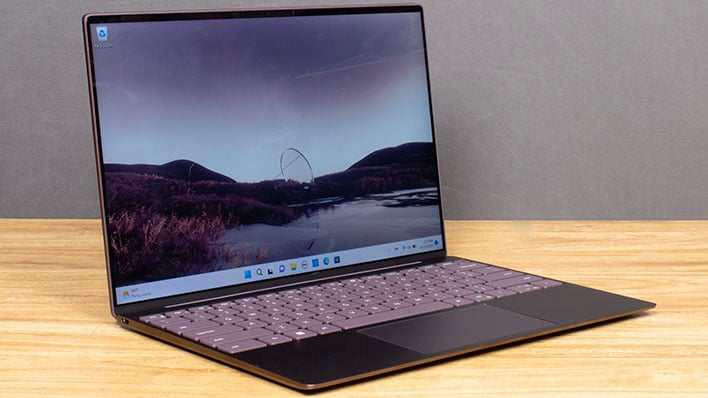 It’s no secret that we’ve been fans of Dell’s XPS lineup of notebooks. The company tries to offer something with broad appeal and premium build quality in the XPS family, and it hits far more often than it misses. The slight misses aren’t all that bad, either; the XPS 13 Plus, for example, is a nice notebook that just runs a bit hot and loud for our tastes. It seems Dell heard our pleas—or at least knew they’d be coming—in its creation of the XPS 13 9315 we’ll be showing you here, a very thin and light notebook that doesn’t sacrifice performance to achieve its svelte form factor.

In fact, the Dell XPS 13 9315 represents a shift in the war between performance and portability. Thanks to a 12th generation Intel Core processor with a base TDP of just nine watts (28w boost), Dell was able to reduce the XPS 13’s footprint and overall heft while actually improving performance. Obviously some concessions have to be made with performance at that low of a power level, but the XPS 13 always felt snappy in normal use. The best news is that getting speed and portability together isn’t going to break the bank; the $899 base model price is quite attractive, and our review unit doesn’t cost much more than that to get 16 GB of memory.

With the XPS 13 9315, Dell produced a laptop that’s lighter than most (including Apple’s brand new M2 MacBook Air), doesn’t skimp on performance, and doesn’t cost an arm and a leg. 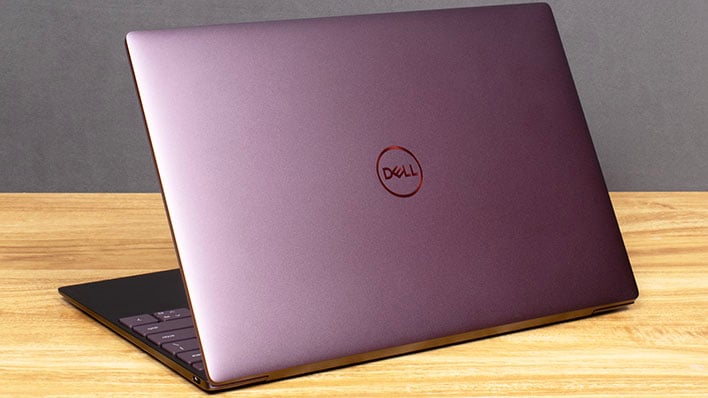 Raptor Lake may be the new hotness on the desktop, but here in laptop land Alder Lake continues to reign supreme. The Core i5-1230U, which represents the bottom rung of Intel’s midrange i5 CPU lineup, has a pair of P-cores with Hyper Threading and a maximum clock speed of 4.4 GHz, and eight E-cores that clock up to 3.3 GHz. That might seem a little unbalanced, but when thinking about the processor’s miniscule TDP of just 9W, it makes sense. Most users will be performing office productivity tasks like using web and office apps on a machine like this, and those tend to feature workloads that just a couple of threads can handle. Meanwhile those efficiency cores can handle background tasks like syncing with OneDrive or scanning for malware via Windows Defender. While E-cores don’t always make a ton of sense on the desktop, they make perfect sense in a thin and light notebook like the XPS 13 9315.

The base model has 8 GB of LPDDR5-5200 memory, but our review unit steps that up to 16 GB. Because LPDDR5 SO-DIMMs don’t exist at the moment, the system is limited to whatever memory is specced out at the time of purchase, so buyers should get all they think they’ll need up front. Unfortunately, due to the constraint of being so thin and light, the same is true for storage. What you get now is what you get, period. Our system has a 512 GB integrated NVMe SSD soldered to the motherboard and connected by just two lanes of PCI Express 4.0 connectivity. That should be plenty, since PCIe 4.0 x2 has roughly equivalent bandwidth to PCIe 3.0 x4, so we don’t think users will notice much. Most configurations of the XPS 13 9315 include dual SSDs, so the total bandwidth should actually be much higher than our base model review unit. In fact, as of right now, the 512 GB option is not present on Dell’s configurator.

Connectivity is all wireless in a notebook this thin and light. Dell didn’t skimp out in that regard, thankfully, as the XPS 13 9315 has a Killer Wi-Fi 6E 1675 network controller, based on Intel’s AX211 chipset, with a 2×2 MIMO antenna configuration. That theoretically unlocks nearly 2 Gbps of bandwidth, although my home network is limited to just 1 Gbps. Still, we could max out the LAN connection for my NAS copying large files at nearly 120 MB per second, which is pretty close to the 1 Gbps theoretical limit, just over Wi-Fi in the next room. There’s also Bluetooth 5.2 connectivity included in the Killer network setup. 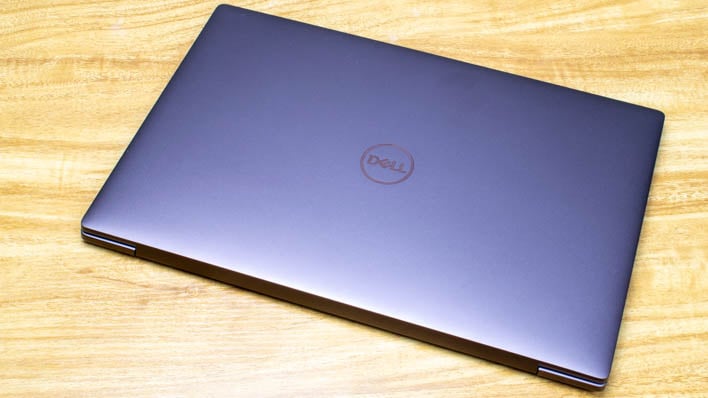 The XPS 13 has used aluminum lids for just about its entire existence, and the same is true here. This time around, the system is available in Sky or Umber finishes. On the color palette, Umber is meant to be a brown-ish color, but the XPS 13 9315 looks somewhere between mauve and smoky purple to our eyes against a neutral gray background. Honestly, I’m a fan; it’s dark and unsaturated enough to not be gaudy, but in the right light it’s just got a little bit of pizzazz. The build quality is pretty outstanding, too. Flexing the aluminum exterior requires more force than I’m comfortable using and there’s no creaking in the body or dual hinges that hold the display in place. 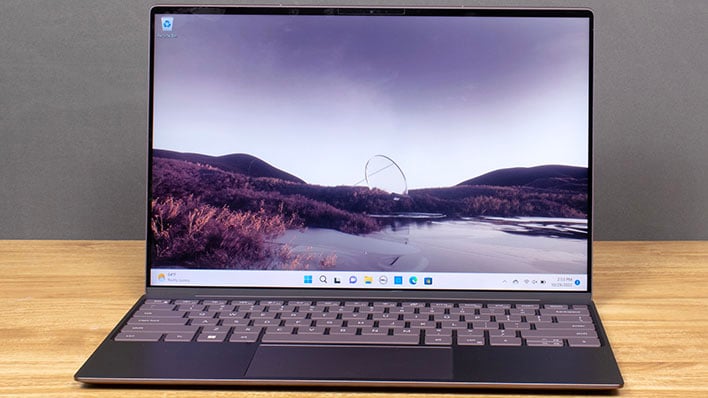 When we open the lid, we’re greeted by a 13.4″, 16:10 IPS display with a resolution of 1,920 x 1,200. That is, of course, an excellent aspect ratio in our opinion, as it gives a bit more vertical screen real estate and also lends itself to a laptop with a deep enough body to use comfortably while accommodating a nearly-full-sized keyboard. The bezels around all four edges of the screen are also rather slim, so the vast majority of the footprint is dedicated to the display. The act of opening the lid requires just the right amount of effort, and it easily opens with just one hand without lifting the whole notebook off the table.

As for the display itself, it’s an IPS panel covered in glass with an anti-glare coating, and it looks great. A maximum brightness of 500 nits is plenty in all lighting short of direct sunlight, the colors are nicely saturated, and the color profile is accurate enough out of the box. There’s no touch capabilities in the base model, but our mid-grade model has full 10-point touch input, plus upgrading to the 3,840 x 2,400 UHD+ model touch capabilities, too. The high-resolution upgrade is only $100 extra, so if you’re looking to consume a lot of 4K video or just want extra-sharp pixels, it’s pretty affordable.

Above that display sits a 720p webcam, and we’d like something better considering this is the age of remote work, but it will get by. There’s a nice two-microphone noise canceling system so other participants in Teams meetings could hear us well. There are no speaker grilles in the XPS 13 9315 because the keyboard spans the full width of the laptop. Instead, the ports that cover the four-speaker stereo setup fire downward on the bottom of the notebook to bounce sound off the desk or table below. Using the system on my lap resulted in a reduction in sound quality, but on a desk it sounded pretty decent. There’s always a lack of bass because these speakers lack the mass required to push a lot of low end, but for watching YouTube videos and doing video calls, they work well. 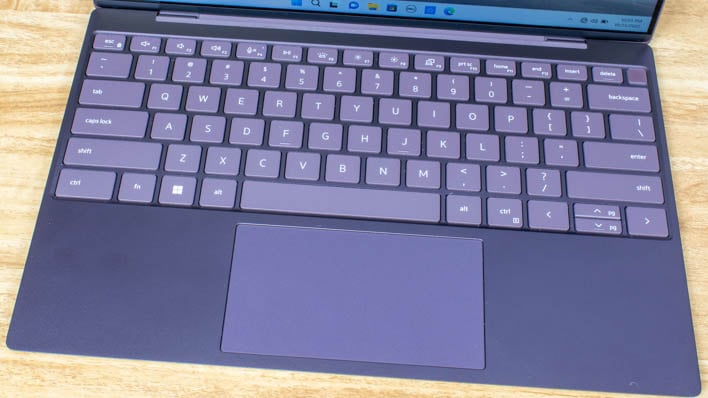 In years past, the palmrest of the XPS 13 was carbon fiber, but that is true no more. Dell has gone the full metal body route and the Umber aluminum finish applies to the the palmrest now, too. As always, the keyboard on the XPS 13 is pretty nice with enough travel to feel good without adding a ton of thickness to the device. It’s different from the XPS 13 Plus’s keyboard, which has almost no space between keys, and uses nice rounded chicklets that feel good under the fingers. I prefer it to the keyboard of my daily driver, the 2021 14″ MacBook Pro with its non-butterfly setup, because there’s about double the key travel. The XPS 13 does a nice job, and we wrote the whole review using it so we’ve had plenty of practice. The keys are pretty close to full size and there were minimal mistakes beyond my usual. The trackpad is a little small, but it’s about as big as it can be while still accommodating the relatively spacious keyboard.

External expandability is always a challenge in a 13-inch notebook, and the XPS 13 9315 is no exception. There’s two Thunderbolt 4 ports with the traditional USB-C form factor. One of those ports will be occupied by the charger when sitting on a desk. Dell has traditionally included a headset jack on its XPS machines in the past but it’s gone here. Maybe they’re not commonly used, but as someone who uses wired headphones at every PC, it’s a little disappointing. Fortunately Dell includes a USB-C to headset adapter in the box, along with a USB-C to USB-A adapter.

You can’t use both of those adapters at the same time and still charge the laptop, though, so a docking station is just about a requirement if this is going to be your sole workstation. Fortunately, my Sonnet Echo 11 Thunderbolt 4 dock worked perfectly, driving a 4K 144 Hz monitor over DisplayPort 1.4 along with all of the other ports without the need for any extra software. You could get by with a cheaper USB-C dock, though. In these photos, also note that the display hinge is open all the way, so there is no 180 degrees of movement here.

Next up, let’s see how this potent portable performs in our suite of tests…