Samsung makes some of the best OLED panels in the world, and it makes such panels for devices as small as smartwatches and as big as 65-inch TVs. Now, the company is planning to enter into a new device segment with a 17.3-inch OLED panel. According to reports, the South Korean firm will enter the foldable screen laptop segment next year.

Samsung Display has reportedly targeted to manufacture 8.5 million OLED panels (43% higher than this year) for laptops in 2023. Out of those panels, most will be supplied to ASUS, which is currently using LG’s foldable OLED panels for its foldable screen laptops. According to market research firm Omdia, the company is also planning to sell such foldable 17.3-inch OLED panels to Samsung MX, which makes Galaxy-branded laptops. If this is true, we could see a foldable screen laptop from Samsung.

The 17.3-inch OLED panel from Samsung Display can fold into half such that each half measures 13.3 inches. It means that when such a laptop is folded, the top half of the screen can be used as a display, while the bottom half can be used as a touchscreen keyboard. Such a foldable screen laptop from Samsung was expected to be launched in 2022, but for reasons unknown, its launch has been postponed to next year.

Samsung Display made 960,000 laptop OLED panels in 2020, 5 million panels in 2021, and 5.94 million units in 2022. ASUS was Samsung Display’s biggest client for OLED laptop screens, but it was replaced by Samsung MX this year as it started focusing on launching more laptops with OLED screens. 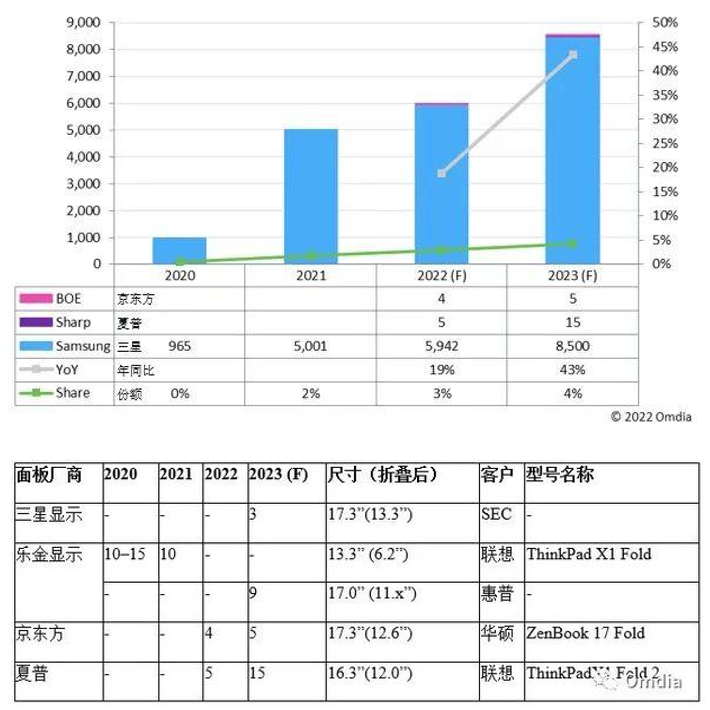