Janelle Junker-Gustafson is in her element in the basement of her Eden Prairie home.

It’s more like her office, decorated with motivational signs.

“Queen of the Laundry,” says one.

“Yes, I love laundry,” Junker-Gustafson said. “It’s relaxing, something I can come down here and with television, I get my exercise. The bending, the turning, it’s challenging.” 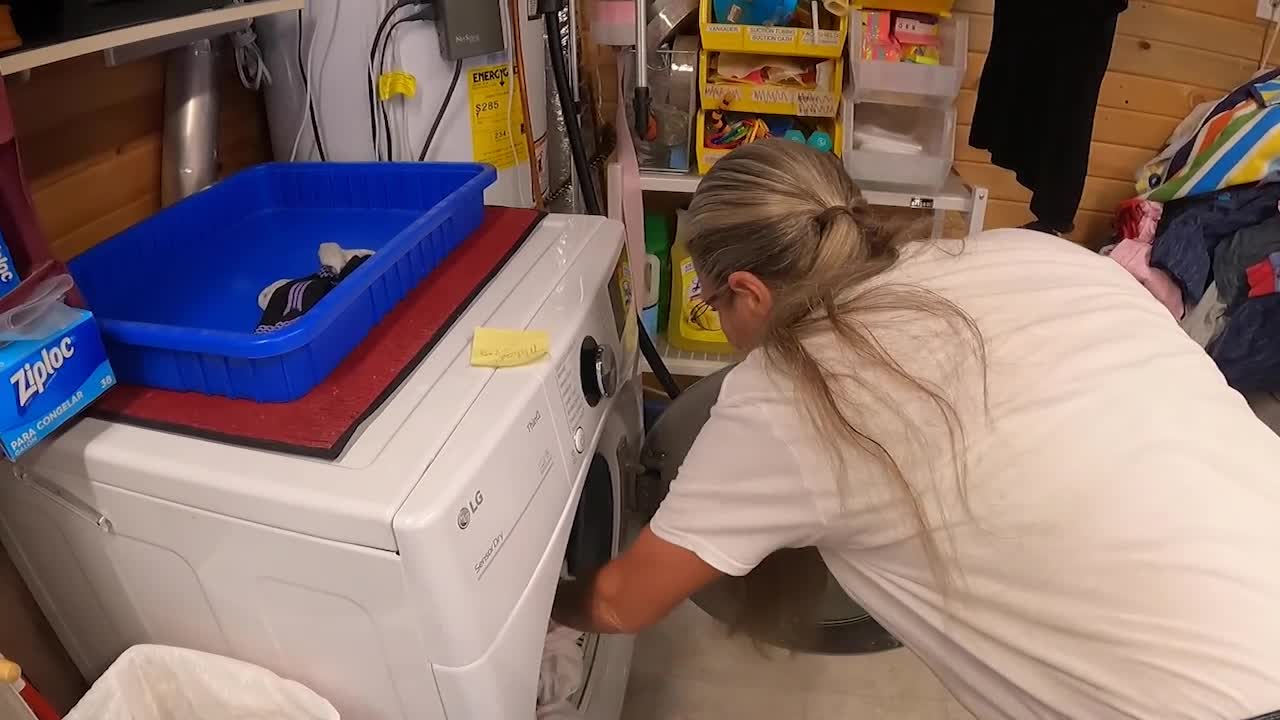 Raising five kids over the last 40 years, she told KSTP she had spent lots of time here between working hours as an accountant and in payroll at a local software company.

Then came the pandemic.

“My job at my other company was cut back a lot because of the decrease in business, and I was looking for a way to earn extra income,” Junker-Gustafson recalled. “I think a laundry service is a much-needed aspect of our society at this point in time.”

The timing was fortuitous.

The app-based service is like an Uber for laundry.

Fertel, originally from Baltimore, said the idea of a laundry outsourcing service started with his wife Ari, overwhelmed by the sheer amount of laundry in their household.

“She was home with our five kids, buried in laundry, and she’s like, this is crazy,” he remembers. “You can tap an app to get to the airport, FaceTime someone from the other side of the world, but I’m still doing laundry like my grandmother.”

But it was Fertel’s son Nachshon, 16 years old then, who started developing an app to link customers and laundry workers.

The company calls them ‘Sudsters.’

“I loved the idea of helping my mom and building that app,” Nachshon said. “I personally hated doing laundry, so I thought it was an awesome opportunity.”

What began as a father-son project in 2017 is now headquartered in Minneapolis and Salt Lake City.

The operation remains small: six staffers in Minneapolis, and four in Utah.

On the other hand, the company now says it has a nationwide network of ‘Sudsters’ like Junker-Gustafson.

“We just surpassed over 100,000 Sudsters signing up on our platform, so that was a huge milestone,” Nachshon noted. “I’ll have to check, yesterday, we had 111,000. It wasn’t until the end of 2021 we started growing on a scale nationwide. At that point, I knew it was catching on.”

Here’s how SudShare works: the company’s app connects clients who need their laundry done with Sudsters who are available. Sudsters, meanwhile, have just minutes to respond about their availability.

The clothes’ owners pay a dollar per pound, and the Sudster keeps seventy-five cents. The service includes door-to-door delivery.

“I sort it and wash it and dry it, fold it, bag it and return it to their door,” Junker-Gustafson explained.

“(Customers) download the app,” Nachshon added. “They put in their address, they include special instructions. They tap ‘do my laundry,’ and that’s it, they’re done. They put the laundry outside their front door, it gets picked up, washed, dried, folded, and delivered, all for a dollar a pound.”

For would-be Sudsters, there’s a vetting process, including a battery of tests and tutorials, Junker-Gustafson noted.

Those who make the cut face a 24-hour deadline to get their clients’ laundry finished and delivered home.

Junker-Gustafson — who goes on the app by the code ‘Janelle 20’ — says she occasionally works until four in the morning to get her loads finished and ready to go.

And there are other requirements, she added.

“You are required to be in a home that doesn’t have pets because they don’t want to take a chance on allergies transferred,” Junker-Gustafson explained. “They want to know that you know how to fold. They go over it step by step.”

Junker-Gustafson said Sudsters who receive good reviews and comments can build credit on a point system, which results in different options in payout, first dibs on orders placed without Sudster requests, and gift cards.

She proudly displayed a SudShare award for delivering over 12,000 pounds of laundry and winning over 20,000 points.

Junker-Gustafson noted that she’s now the top Sudster in Minneapolis, and second in the nation.

The company says it’s now earning more than $ 1 million a month after increasing its business twenty-fold when the pandemic hit.

“Our goal is to create a new norm, where people outsource their laundry,” Fertel said. “On the customer side, we’re selling the most precious thing on earth, which is not a laundry service, it’s time. On the other side of the platform, we’re offering people this unique work-from-home opportunity that they’ve never had before.”

John Stavig, with the Carlson School of Business at the University of Minnesota, said the pandemic forced many people to pivot and think about business opportunities outside the box.

“I’ve always been of the belief that change creates opportunities for entrepreneurs,” Stavig explained. “If there’s demand for a service like this, but other times, just in the supply that now we have a lot of people at home that can pick up another gig job or a service whenever they want to.”

Fertel told 5 EYEWITNESS NEWS he hopes to turn SudShare into a $50 billion company.

For her part, Junker-Gustafson noted she’s added tens of thousands of dollars to her income, washing, drying, and folding ten to fifteen loads of laundry a day.

But she added there’s also satisfaction in getting a job down on her terms and said she’s not done yet.

“It’s nice bringing in extra money, and it’s nice providing the service,” Junker-Gustafson said. “This is something I enjoy. I could help somebody and I can do something very well, and I’m proud of what I deliver to my clients.”

You can find out more about SudShare here.